Some five years ago, if you went for a walk up Donkey Lane and crossed the railway line, you would have noticed a wild scrubby patch of land on your right. A quick glance would have shown thick brambles and ivy growing around some struggling trees, and dense undergrowth dominated by nettles. In April there was a scattering of blossom to see, and then in autumn glimpses of apples in the higher branches, revealing that someone once planted apple trees there.

Since Greening Chinnor began to selectively clear the area in 2019, it has been a revelation to see just how many species of plants have sprung up from seeds which have been resting in the dark soil. Seeds can lie dormant for many decades until the ground is disturbed and light is let in. It is very likely that at least some of the plants we find there today, are descendants of plants which were growing there when people lived on the site.

We carried out monthly surveys of the flowering plants between May and September last year, 2021. A flowering plant does not have to be in flower to be counted but it is one which will flower at some time. The following article will give you an idea of the range of plant species that we counted, which added up to 75 in all. In addition, a different survey had been made earlier in March, just looking at the non-flowering plants. This revealed some 34 species, which were mosses, lichens, fungi and one liverwort. So overall the flora found so far comprises more than 100 species, a quite astounding number.

Firstly, the trees and shrubs. Besides some 20 Apples and a Plum, we have ... Read more

As our planned AGM scheduled for Tuesday 26th April clashes with the Chinnor Parish Assembly, it has been decide to postpone the AGM to Tuesday 24th May. 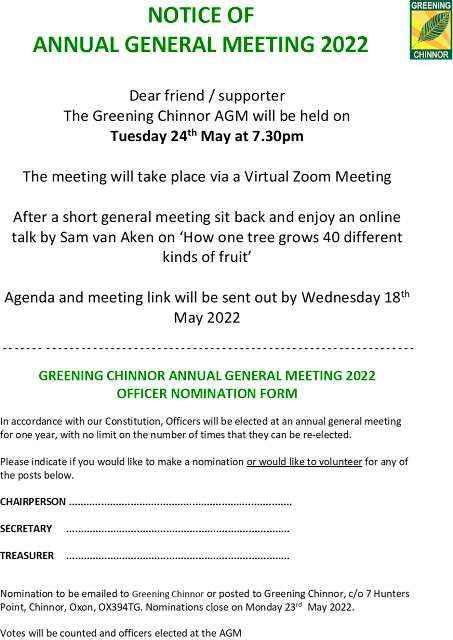 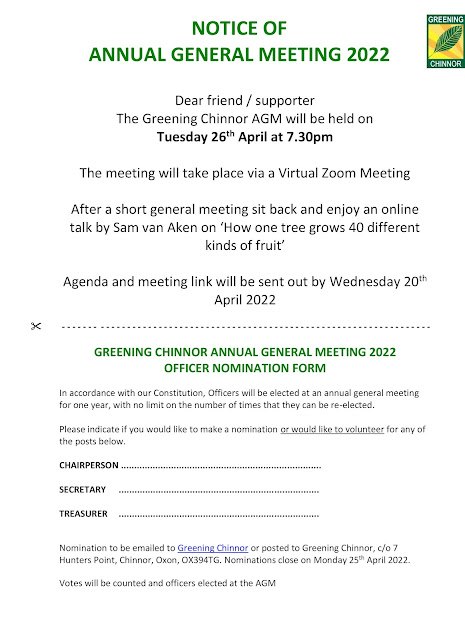 We are keen to increase our pool of menders so we can help more people at our Repair Cafes. Please get in touch if you have skills to share!